The Ending Has No End: Thoughts On The Ending Of Mass Effect 3

I have not taken many bold or unpopular stances in my life, and rarely have I shared them with strangers, but step back because I am about to toss down one mighty unpopular opinion-I think that the ending to Mass Effect 3 was good.

Admittedly, I had a different exposure to it. I played Mass Effect 2 after the whole ending debacle earlier this year; the reason I did so was because I supposed that if so many nerds were so angry about it, then it must be a pretty good game to begin with. I was not disappointed with ME2 and bought ME3 after the EC DLC was made available. I installed it before the end, so I never saw the original endings. So, as someone who never saw the original ending, I can provide insight without my previous opinion tainting said insight.

Choice is a big theme in the Mass Effect series. Choices make who we are, and those choices have consequences. A lot of people have complained that the ending was “press the button you want for your ending”. I don’t argue that that’s what happened, but I believe it was intentional. In conversations with EDI, one of the more salient points was that sapient beings make their own decisions. The ending was a decision, and I believe that was an appropriate thematic choice. Choice is what makes a “soulled” AI different from VI or “soulless” AI, at least in my view. VI can only do what it’s programmed to do (or not, although to know the exact opposite of its programming is still a limitation of its programming), but sophisticated/ “soulled” AI can chose what to do, like EDI and the geth.

Secondly, the ending asks you to come to your own conclusions. I like that. It makes the game last longer and gives it an afterlife. Shepard was the first organic to be able to speak to the AI/God/Boy that was the collective consciousness/boss of The Reapers. Rather than leaving Shepard to die, the AI/God/Boy chose to speak with Shepard. Not only that, but it presented Shepard with ways to break the cycle. Why did it do that? What was the catalyst that made this cycle so different from the ones before it?

My theory is that the conflict between organic and synthetics was no longer a certainty. The AI/God/Boy was aware of this, partially because of the choice that the heretic geth made to worship The Reapers. That the geth were able to form factions was a sign that they had evolved past merely AI and into true sapience (EDI’s storyline serves to reinforce this idea). In addition, aside from the heretics, the geth are some of the more reasonable beings in the galaxy. They kept to themselves and didn’t invade other systems. The quarians are at fault for the conflict. The geth have retained the label bestowed on them by quarians (literally meaning servant), which is an indicator of their sentimental relationship with the “Creators”. They do not seek conflict, yet they defend their own existence. Geth could choose to live anywhere as they are not bound by the restrictions of organic life, but they have an attachment to their homeworld, just as other species do. 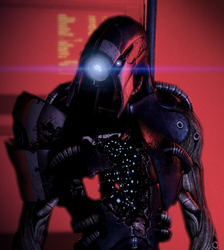 Legion informs Tali that the geth maintain the homeworld for the return of the Creators. Just the word “Creator” implies respect and even affection for the quarians. They regret the deaths of quarians, yet the quarians that seek peace with the geth are considered to be fringe. The geth have been tempered in fire, during which they have developed the qualities of the Citadel races. AI/God/Boy recognizes this via the heretic geth interaction, and, combined with the tenacity of organics (embodied in Shepard, who, regardless of whether you are a paragon or a renegade, is the personification of sapient organic nature) recognizes that the cycle need not be continued. The organics have finally done their part by completing the Crucible, proving that they can be as smart and efficient as synthetics, and the synthetics have done their part by evolving souls, proving that they can understand organic reasoning.

A short sidebar here: humans have only been on the scene for some thirty years, but in less time than it takes for a highway to be built, we are saving the galaxy. This is side effect of how great we think our own species is. It’s usually presented in the framework of a Goldilock’s Zone: we aren’t as brutish and uncivilized as those Krogan/Klingon/Dwarves; however, we aren’t too smart and cold, like those Vulcan/Salarians/Elves. We are juuuuuust right.

The Reapers themselves are “soulless” AI, unlike the geth and EDI, who have evolved “souls.” The AI/God/Boy knows from its programming that The Reapers are no longer necessary since synthetics have evolved “souls,” so conflict is no longer a certainty because synthetics and organics are finally analogs of each other–albeit in a very early stage. But, as a “soulless” AI, the AI/God/Boy  is unable to make the choice, which is why Shepard must make the choice.. since the Reapers cannot.

I could elaborate, but that isn’t the point of this article. The point is that I came up with that theory because the game gave me the choice to do so. It didn’t hold my hand, nor did it give me a big explosion where Shepard is carried up to Space Heaven by space eagles (although it did rely heavily on “space magic,” but hey, that’s a given when you are suspending the rules of physics enough to enable faster than light travel). I am sure lots of people who have put effort into it have come up with their own theories. The beauty of the ending is that these theories can exist.

People have accused the writers of being lazy hacks, but I believe they wrote a massive backstory and have left it up to you to make the ending, should you be inclined to. Not traditional writing, sure, but there are too many variables to make a singular ending that would have satisfied everyone. They have given you the threads, and it’s up to you to weave them together.

Danielle Peterson wrote a book (that isn’t about a video games) and has a website.