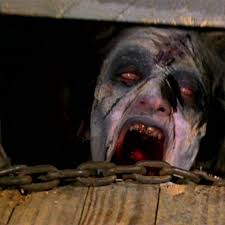 Arguing With Myself About Evil Dead’s Sexual Violence

Fair Warning: This week’s topic is about as adult as I get. Mature attitudes  will prevail.

This week we found out that the Evil Dead remake scored an NC17 rating its first time up against the MPAA. NC17 is notoriously unpopular with theaters because it automatically cuts down a film’s profit margin by virtue of its age requirement; it is the only rating that outright bans certain people from seeing a film. Evil Dead is now going back to editing to get an R rating instead.

My first thought: Well is that ridiculous tree rape scene in it?

For those that haven’t seen the original, there is a seriously graphic scene of a woman (Cheryl) in the woods being raped by… well, the woods. This wasn’t a Shawshank Redemption style scene where the camera pans away from the assumed assault. Cheryl is shown held down and penetrated by a tree which impregnates her with evil. Heavy-handed metaphor aside, it’s almost pornographic. Check out IMDB’s description of the scene:

The trees and saplings and roots around her come alive and begin to entwine around her legs and arms and neck, tearing her bathrobe from her body and tripping her to the ground. The proceed to tear at her nightie, pin her arms down, open her nightshirt, expose and squeeze her breasts and finally in an act that labeled this movie a video nasty, spread her legs apart and violently rape her body with the thickest, longest and gnarliest looking tree root around.

The description is user-generated (hence the grammar and usage of “video nasty”) but an accurate point-for-point description of the scene. A scene which was hinted at in the teaser trailer for the remake (NSFW).

I have a lot of thoughts about it.

And a part of me is wary of over sensitivity. Like murder and theft, rape does happen. It’s a part of our context and our history and avoiding it in film doesn’t make it disappear. Consider A Song Of Ice And Fire for a moment.  This issue has some traction in George R. R. Martin’s Westeros. In those novels rape is an ever-present reality of medieval life. And it’s a very real tool in warfare. Characters consider warfare strategy while taking into account the odds of their people being sacked and raped. It’s not meant to offend or titillate any more than using a siege engine or a magic spell. And the books do have a similar “scene” in them in A Game Of Thrones.

Without getting too deep into the mythos, one character is sold into a marriage with a tribal horse lord, and there are moments that are not always consensual. It’s the only non-consensual sex that’s actually written about in the books, but other things happen out of sight. The character overcomes and transitions into a well-developed pillar of the story. In my mind it’s not kid friendly, but it’s not unnecessary or in bad judgement.

Alien is a better known example of the same thing. Face-huggers forcibly attach themselves to a person and plant the seeds of evil.

So there is precedent for sexual violence as part of a good film or story.

On the other hand, it seems silly saying it’s not supposed to titillate or offend any more than other parts of a book or movie, because they are created specifically to entertain. So we are supposed to take a graphic rape as part of our entertainment. The reason it seems gratuitous to me is because the story can be told just as well without it. The inclusion of a similar scene is, at this moment, completely speculative in the new Evil Dead, and it doesn’t seem to matter to the plot.

And the scene, arguably, takes away from the film. Even Sam Raimi conceded that the scene is distracting from the overall story and creates a kind of offense among viewers that he never intended.

Just because you can do something, doesn’t mean you should. And this “classic” scene interferes with entertaining the audience. No doubt that’s why Evil Dead 2, which was really just a polished remake of the first film, features a toned-down version of the tree assault scene.

So is it gratuitous? I would say absolutely. Should it be in the new film? Well, I’m not sure. For better or worse it is a part of the original, and it wasn’t offensive enough to derail the film. I do find one fan-theory disturbing though. An argument can be made that Cheryl enjoyed the assault. If you watch the scene (which you can Google) it does appear that Cheryl may have enjoyed parts of it. Or not. I don’t know, but the notion puts me in an uncomfortable place.

Speaking of impregnated with evil. If this topic left you a little uncomfortable, have your mind blown by this video and feel better.

What 2013 Has to Offer on the Big Screen

I thought I’d take a moment this week to briefly look at what’s hitting the box office this year and give a quick prediction on the outcome of each.

I know I’ve missed a few films here and there, but I don’t really care. I think the list is long enough as it is now. It doesn’t need any more.

What films are you looking forward to this year?