Monsters University combines two of my favorite things: Pixar movies and college. If that combo isn’t as big of a draw for you, no worries. The film is still worth your while.

This prequel to Monsters, Inc. gives viewers a look into the lives of Mike (Billy Crystal) and Sully (John Goodman) before their career at Monstropolis’ mega corporation. After going on a pivotal field trip to Monsters, Inc. in his youth, Mike sets his sights on becoming a Monsters University graduate. His expansive knowledge of the art of scaring gives Mike an edge at the start of the program, but he is soon upstaged by Sully’s thunderous roar technique and prestigious family name. Their rivalry escalates until they find themselves competing on the same team during the university’s annual Scare Games. With a group of misfit monsters in tow, they learn they must work together to succeed.

Although the plot of Monsters University is somewhat simplistic, the film manages to win over viewers with its commitment to character development. Mike and Sully’s stories become more rounded; we get to know them just as the two get to know each other. Through the course of the film they show equal parts strength and vulnerability, humor and perseverance. 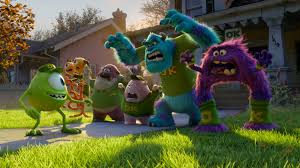 The motley brothers of Oozma Kappa (OK) toughen up for the Scare Games. (Image: youtube.com)

Mike and Sully are not the only monsters with whom we get acquainted, however. We meet Randy Boggs (Steve Buscemi) when he is still a gawky chameleon who wants to be part of the in-crowd. We also get acquainted with the brothers of Oozma Kappa, including Don (Joel Murray), the non-traditional student with a history in sales and Squishy (Peter Sohn), a multi-eyed creature with a good heart. Overseeing all of these students is the formidable Dean Hardscrabble (Helen Mirren), whose strict demeanor is as legendary as her all-time scream record.

Although the hijinks and personalities are plenty entertaining, it’s what we do not see that leaves the most positive impact. In typical Pixar fashion, Monsters University presents themes that are relatable and timeless: strive for your goals, celebrate your talents, and embrace the uniqueness of others. Those are messages that both monsters and humans can live by.